Home/Buyers Guide, Features/Hero 7 Vs Osmo Pocket – Best Pocket Camera For Mounting To A Drone
Previous Next 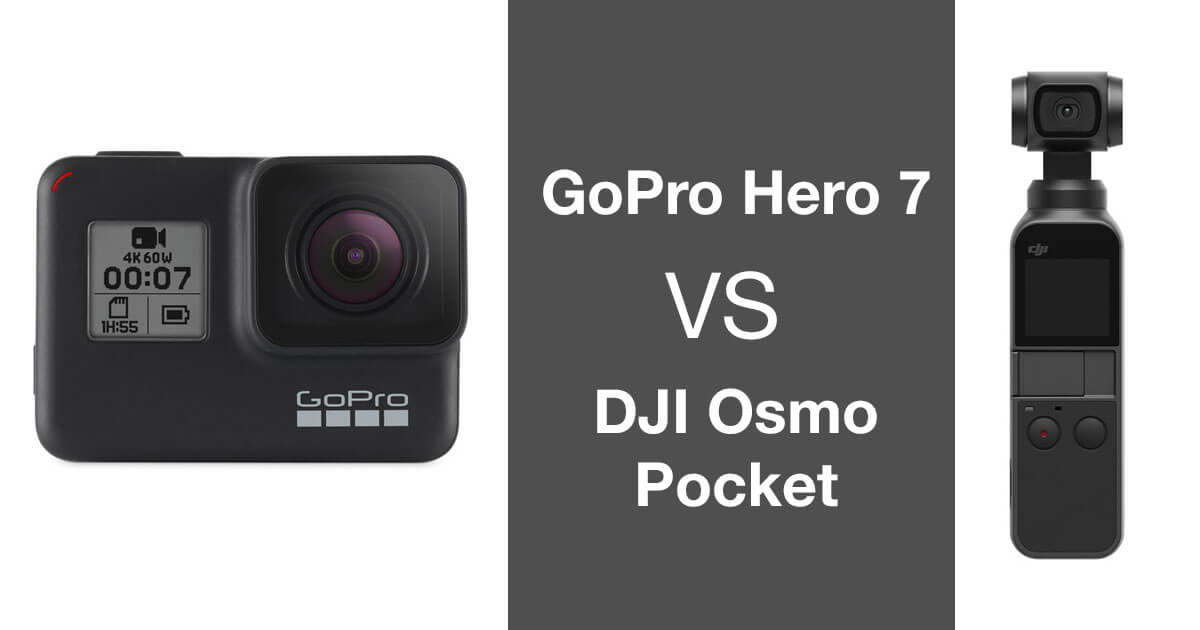 Now before we start let’s be clear that this is like comparing apples and oranges but for sake of this article they can both produce the outcome we want.

Ok so the main difference between the GoPro Hero 7 and the DJI Osmo Pocket is that the GoPro is an off the shelf action cam, ready to take on any conditions whereas the Osmo Pocket is more of a casual everyday consumer camera (although it does have an optional waterproof case)

So the GoPro being an action camera means it has to be one sealed unit to keep out dirt, sand, and water. This has led them to invest heavily in creating excellent digital in-camera stabilisation.

The Osmo Pocket, on the other hand, has an electronic gimbal which offers a lot more flexibility in the way you shoot but is more restrictive in terms of the conditions you put it in.

Both cameras weigh in at exactly the same weight of 116 grams and although they are different shapes they will both fit in a reasonably sized pocket.

The GoPro is a more practical camera to carry around to just mount to things because it doesn’t need a case and it has no moving parts. The Osmo Pocket, on the other hand, has a more natural feel for moving shots and allows you to do much nicer cinematic panning and tracking shots due to its handle design.

Both cameras are capable of shooting 4K 60fps but the max video bitrate for the Osmo Pocket is 100mbps compared to 78mbps for the GoPro Hero 7. Both cameras shoot 12-megapixel stills and the main difference really is in the lens.

The Osmo Pocket has a 26mm lens whereas the GoPro has a range of options from around 16mm wide to 24mm at linear mode. The Linear mode that is the closest to the shooting style of the Osmo Pocket is only available in certainly certain resolution settings. Ultimately, the GoPro is made to naturally shoot a lot wider than the Osmo Pocket.

Both cameras feature a handy portrait mode for those looking to primarily post to social media channels.

GoPro Hero 7
For on the go shooting you have the option to use voice commands to operate the GoPro.

In terms of video the GoPro offers time-lapse and timewarp modes, timewarp is essentially a timelapse on the move. You also have the ability to actually do live videos straight from the camera. It can also harness GPS data to show speed and elevation data in the shot. If you are shooting 1080p it can do an amazing 240fps, that’s 8 times normal speed slow motion.

For photos, it has face smile and scene detection as well as touch zoom. It also features an HDR mode called ’SuperPhoto’ that really makes the colour in photos pop.

DJI Osmo Pocket
The Osmo Pocket’s gimbal really shines here with built-in smart shooting modes like ActiveTrack for following subjects, FaceTrack for keeping your face in the frame at all times (perfect for vloggers) and FPV mode which smoothly follows the camera’s orientation to give a real sense of movement in a natural smooth way. Motionlapse allows you to set down the camera and set it to do a moving time-lapse. NightShot offers handheld long exposures which you simply cannot do on a lot of other cameras. It also features a 3 x 3 panorama mode that will stitch together 9 photos to make one huge panoramic image. 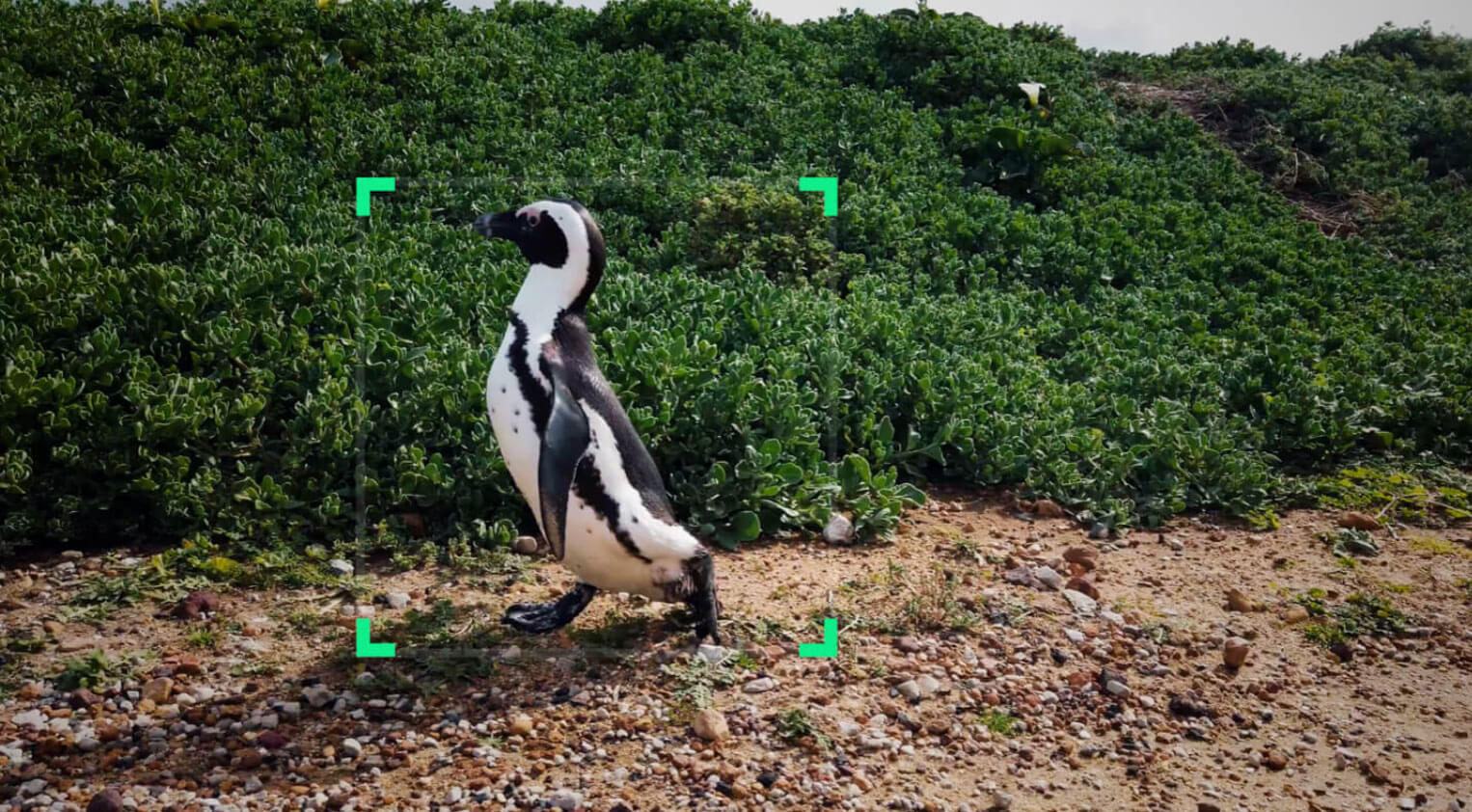 GoPro Hero 7
The GoPro has been around for years and has tons of accessories and mounts, both official and 3rd party. It has a proven track record of being robust and generally quite reliable. The software has been through many iterations and is now at a point where it is stable for the best part.

The ability to charge and swap out the GoPro’s battery is a big plus for us because the last thing you want is the camera to die in the middle of filming with no way to get it back quickly.

DJI Osmo Pocket
The Osmo Pocket has a plug and play option for Android and iOS phones making it a bit quicker than the GoPro to get a larger screen for framing and navigating through the menus for more complicated shots.

The Osmo Pocket’s gimbal allows it to do some nice additional features like the panorama shot which can stitch 9 shots together handheld. It can also give some motion to time-lapse with its pre-programmed tracking feature. The gimbal also works well for vlogging type shooting with it face detection features that will always keep your face in the shot and in focus.

GoPro Hero 7
The GoPro’s electronic stabilisation can be temperamental in low lighting conditions and in certain situations you may even need to step in to protune to get your footage looking right.

The GoPro Hero 7 cannot shoot 4k in the linear mode which is a real shame because it means all your footage will naturally have that wide fisheye type distortion. You can correct this in post, but its not really something you want to have to think about as it will change the composition of your shots slightly.

DJI Osmo Pocket
The Osmo Pocket has the drawback of having no replaceable battery, meaning you need to have a portable charger handy to keep it alive.

The Mimo app is in such an early stage of development it will have years of bugs and updates ahead of it to iron out across Android and iOS.

The Osmo Pocket’s audio is very poor from the internal mic, external mic options are coming but it does add to something that is so simple to just take out and use.

The Osmo Pocket seems to lack some quite basic features you would expect to get like a mounting point, either through the casing or straight into the unit. It also lacks Wifi and Bluetooth connectivity without an additional dock.

Mounting the camera to a drone

If you have an older or larger drone with a decent payload capacity then it is possible to mount either of these cameras and get amazingly smooth 4k 60fps video.

It’s obviously not a perfect setup and having that gimbal and camera built right into the drone is going to offer way more flexibility in the way you shot. But this is going to give you some shooting options you may not currently get with your drones camera.

Ultimately the two cameras are very different beasts but they share some similarities and the thing that really puts them head to head is that they are both pocket cams in the same price bracket.

In our opinion, you really can’t go wrong with either, but do your research and make sure you are getting the one that best suits your shooting style and needs.