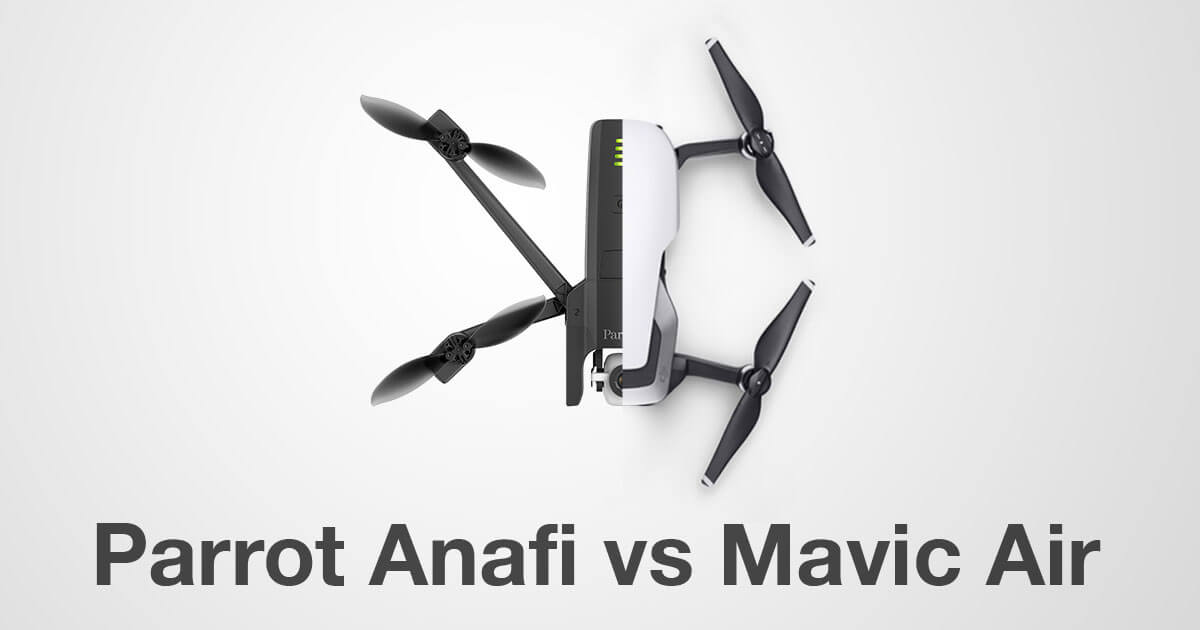 Outside of the Mavic Pro which didn’t make it in to this comparison due to the slightly higher price and specs we think the Parrot Anafi and DJI Mavic Air both sit in the top 3 folding drones on the market. Here is a quick breakdown of how they compete with each other on specs.

Both are super portable but Mavic Air doesn’t charge on the go whereas the Anafi is lighter by over 100 grams and can be charged over USB C through a power bank or car charger etc making it great for travel. This means the Mavic Air needs to travel with more batteries or you need a power pack and power point handy for charging.

The biggest thing to note is that the Mavic Air has built-in 3 way facing obstacle avoidance and the APAS system which is a great failsafe, especially when using automated flight features. The Anafi does have failsafe features built-in but no obstacle avoidance unfortunately. The Mavic Air’s sport mode reaches top speeds of 68kph / 42mph which blows the Anafi out of the water with top speeds of 53 kph / 33mph.

Anafi has the Mavic Air beat on flight time with the battery squeezing in an extra 4 minutes up in the air at 25 minutes per charge. Amazingly the tiny Anafi can handle up to 50 km/h / 31 mph wind resistance while the  Mavic Air is up to 38kph / 23mph. The Mavic Air has a flight distance of up to 10km (6.2 miles) which is where is really dominates because the flight range on the Anafi is only 4km (2.5 miles).

In terms of FPV the Mavic Air can be used with the DJI Goggles and Racing Edition Goggles. There is no official word on Anafi Goggle compatibility but it is likely there will be something similar to the current Parrot Bebop Cockpitglasses coming soon.

Mavic Air has an expandable built-in 8gb storage (expandable using Micro SD cards) while the Anafi has no on-board storage but comes bundles with a 16gb Micro SD card. Both have a 3-axis gimbal, shoot 4k video at 24/25/30fps using MP4, top out at a 100mbps bitrate and shoot photos in JPG and the DNG (RAW) format. So it really falls to what shooting features you want to have, be sure to check if the Parrot features are included in the app or paid add-ons.

Parrot have really listened to customers with the Anafi and brought in some nice new features like a 180 degree gimbal system that allows for shooting directly down and even shooting up. It also features a 2.8x lossless digital zoom at HD or 1.4x at 4k which is really a big innovation for drones in this price bracket.

They both sit in the same price bracket really, the Anafi comes in slightly cheaper at £629 ($699) and the Mavic Air starts at £769 ($799) with the option to upgrade to the Fly More bundle. The additional money you are paying for the Mavic Air is really paying for the obstacle avoidance sensors. Both drones of a lot of functionality at a very competitive price point.

DJI offer the Care Refresh plans as an additional extra with their drones, these packages can come in very handy if you get in a scrape and need replacement parts. For the Anafi you would need some 3rd party insurance to get it covered if needed.

Which one to buy

Its a really close call between the two based on specs, if you plan to use your drone autonomously then the obstacle avoidance in the Mavic Air is going to be a must-have. But for sheer portability and practicality it looks like the Anafi has it pretty well covered. Both are fantastic drones for both beginner and more seasoned pilots as they both have sports mode and tons of automated flight features for capturing great video and photos.

We don’t think you will be disappointed with either drone but hopefully you can now make a more informed decision before parting with your hard earned money.