360 cameras for drones at the time of writing this post are few and far between. But they are coming soon and this is a quick intro into the world of 360 cameras up to now, with a few viable options for shooting aerial photo and video from your drone.

360 Cameras have had a slow and long progression into the market. But we are at the stage where they are finally available as a standalone unit with a simple workflow that is affordable to the mass market. 360 video has also been adopted into some major social networks, meaning you can finally share your creations quickly and easily with other people.

Before 360 video came panoramic mirror lenses, these offered a way of you to capture a whole 360 without the need to shoot multiple pictures. It was a great idea, but sadly these types of lenses often suffered from low resolution and distortion due to the way they attached to existing equipment. The 360 effect was only a panorama, so that meant the sky and the ground we not visible in the shot, so you had a large black area at the top and bottom of the image if you were to view it as a 360.

Shortly after these, it was decided that retrofitting this type of thing to a camera was not feasible and standalone cameras started to appear on the market.

note: Avoid old style mirror lenses like the Pano Pro and Eye Mirror as these are not full 360 products. They offer more of a panoramic image than a full 360 wrap and that is what they are for. But they do not offer good results in our experience. 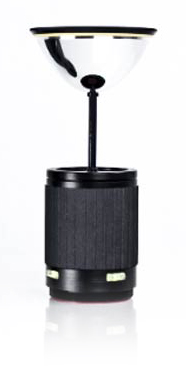 Some early 360 cameras don’t actually capture the full 360 degrees of video and have a black spot at the top and or bottom stitch. This is not something you want in 360 video as it instantly breaks any immersive qualities of the video. In some cases people use multiple single cameras to capture the whole 360 view, the Kodak SP360  is a good example of this. You can see on the website how they use two cameras to capture two sides of the 360 hemisphere to stitch together and create one view. This does solve the problem, although it can add some extra work and potential headaches in the post production workflow. In some ways you get good flexibility having two separate cameras, but part of the problem can often stem from the two cameras being too far apart from each other and causing bad stitching in the video. Be sure to always check the video produced by the camera before buying, that way you can see blind spots (if any) and how good the stitching is. Quite often the blind spots of the video will be covered with a company logo or something similar.

You will need to view the video below in Youtube to see it in 360.

Unsurprisingly the next step in 360 cameras was to produce units that comprise of two cameras in one sealed unit. Unless you are shooting something professionally for clients the best route to go is an all-in-one 360 camera setup. More often than not this will comprise of a dual lens setup, each lens will capture one half of the 360 view, sometimes not always equally. This means you can get the shots you want and share them on social media with very little hassle.

The next thing to look out for is camera resolution, this should play a big part in what camera you decide to buy. Now with 360 cameras the resolution is not quite as simple as a standard camera, the resolution is stretched over the full 360 degree plane. HD (1080p) is fine for Facebook videos and viewing on phones and smaller devices, but when viewing on a monitor the blurry image really starts to break the immersion of the video. You need a 4k resolution or above really to be creating nice high quality content for desktop screens.

You may look at something like a 3k camera costing $/£99 and then look at an 8k camera and see it is $/£3000. That may make you think the difference is crazy for what you get, but the reality is that the whole setup is different. Something offering up to 4k could have two lens, but to get good quality 8k you are looking more likely to be having 6 or more lens capturing that. That is where the expense lies, in those extra lenses and sensors collecting the image.

4k realistically for video is a prosumer sweet spot in 360 due the compact nature, simple setup and workflow. But its a slow time for affordable 4k 360 cameras.

Many standard 360 cameras are a bit bulky to attach to most drones for example the Insta360 Nano , Air, LG 360 Camera  and Samsung Gear 360  offerings only support specific devices. You don’t really want to have to attach your phone or 3rd party devices to the camera as it will add too much size and weight. An uneven load or too much weight will compromise your drones flying ability and may result in you loosing control, destroying your equipment or worse. Be sure that your drone can handle the weight before exploring too far and switch off any wireless camera features than may interfere with your drone during flight.

This is just a quick rundown of our favourite 360 cameras that are suitable for drone mounting to consumer drones. This may require some modification depending on the drone you have and the type of camera you decide to mount to it.

Ricoh are a big player in the current 360 camera market and are rumoured to have a new 4k 360 offering on the way, the ‘Delta’ as a successor to the Ricoh Theta S . The Ricoh Theta S  is a fine camera, but the bump in resolution will certainly not go amiss. 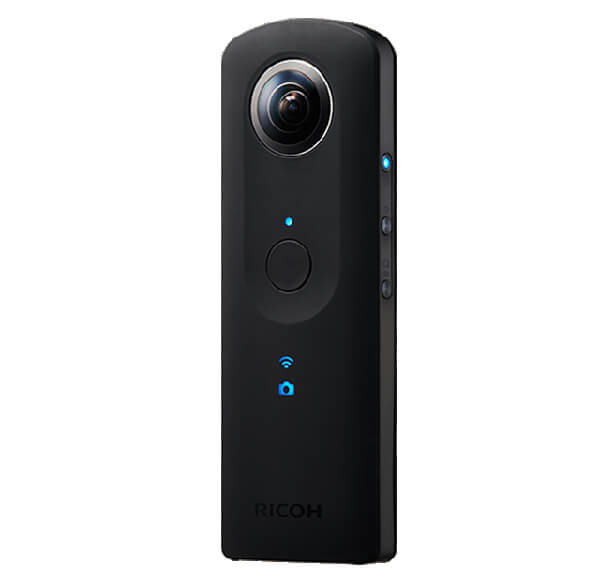 Nikon have come to market with the Keymission 360 . But it has had an underwhelming launch, the Keymission 360’s controller app is plagued with bugs, making it hard to pair and use remotely. Fortunately this is not an issue when attaching to a drone, all you need to do is hit record and let it go.

For drones, it is all about size, currently Nikon’s Keymission 360 is the most practical with its small form factor, mounting options and rugged casing. You want the camera to be fairly rugged, because it only takes one of the landing skids to break and your camera is on the ground.

Nikon should be getting close to ironing out the bugs in the app and a price drop cannot be far away with the initial reactions it has received from some users. 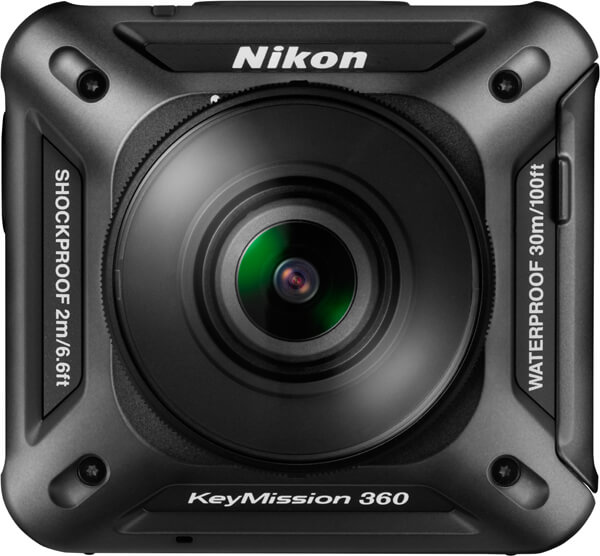 Kodaks new Pixpro Orbit360 4k is due for Q1 and is hot on the heels of Nikon for prosumer sales. The Orbit360 is essentially two SP360’s sealed together as one unit. They already have the experience in 360 with their previous SP360 camera, so the Orbit360 has potential to be everything Nikon’s Keymission 360 should have been. The only drawback is the lack of water and shock proofing. 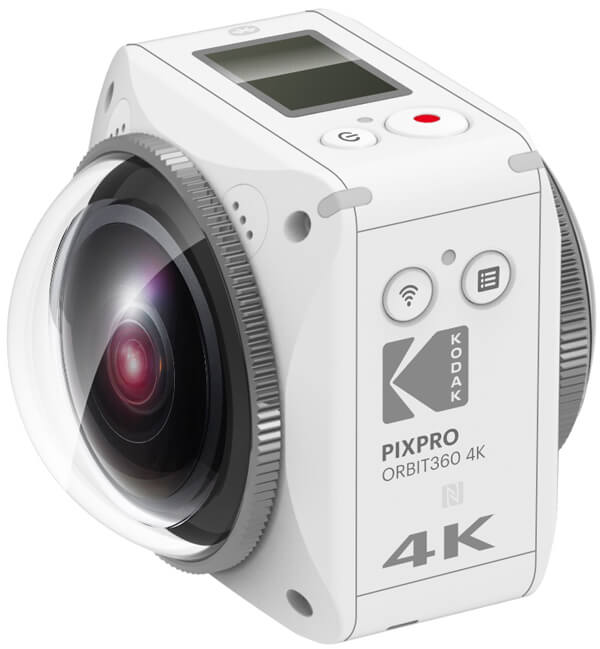 If you are new to the world of 360 you will likely not heard of this brand, but Insta360 make some great 360 cameras and are starting to gain a real reputation in the world of 360 video. Their latest product the Insta360 Air was launched and funded through Indiegogo making over $/£200,000 and gaining over 1000% funding. The Insta360 4K  is a standalone dual lens camera that on first glance looks too bulky to attach to a drone, but people are doing it. 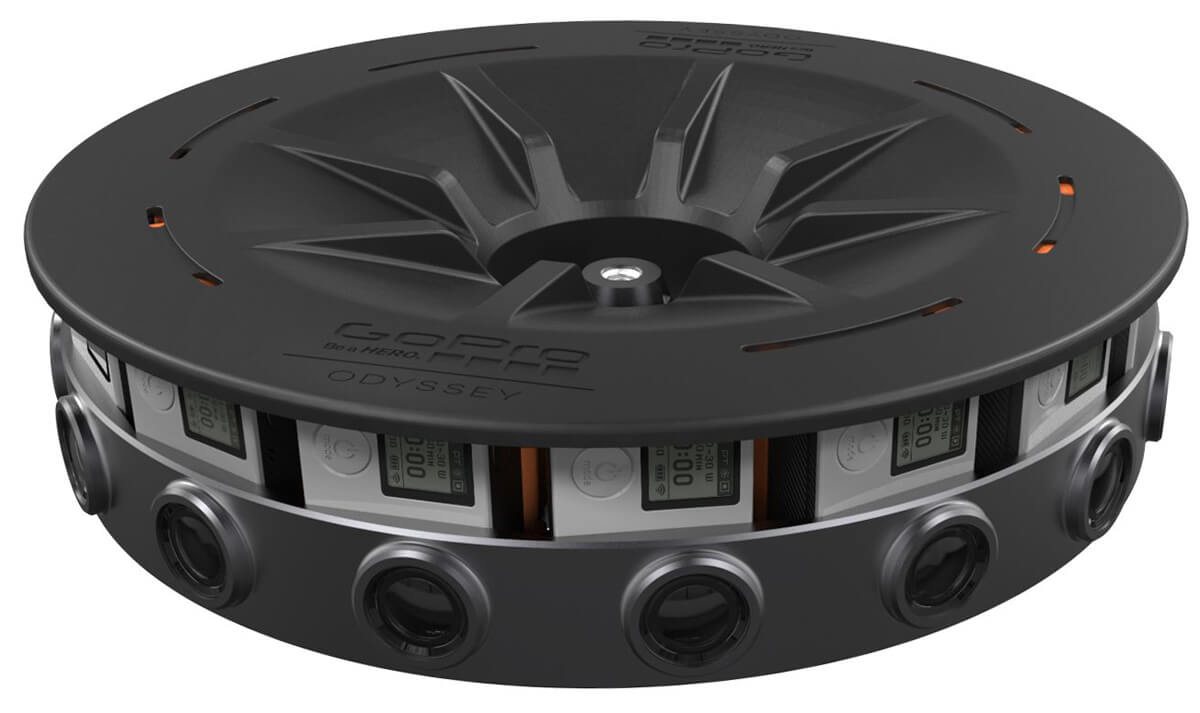 Larger pro drone rigs, may be able to lift camera arrays, setups like these can be incredibly expensive but the results these arrays offer is outstanding.

Insta360’s ‘Pro’ 360 camera and the GoPro Omni both offer 8k video and are comparable price wise at around $/£3000. The Insta360 Pro is an all-in-one camera solution where as the GoPro Omni is simply a housing for 6 GoPro Hero 4 cameras. The workflow of the Omni requires you to have a minimum of 6 Micro SD cards to capture to and these need to be transferred individually during post production. Fortunately the Omni comes with software for stitching and publishing all of the footage. The Omni is more versatile with the cameras being removable as well as waterproof and shockproof out of the array. But the Insta360 Pro is certainly a much simpler process with the ability to record the footage all on to one SD card or transfer directly using USB 3.0.

GoPro’s Odyssey is a professional 16 camera solution that will set you back $/£15,000. There is currently not a new version for the GoPro Hero 5 camera. The reduced price of the Hero 5 will actually make these rigs slightly more affordable, the camera is around 100 pounds or dollars cheaper so that is around 1600 pounds or dollars when you cost up all the cameras.

At the real top end of the market is the 17 camera Facebook Surround, not commercially built by Facebook. It is more of an open source instruction manual to build their 360 camera, although it is rumoured to cost in the region of $/£30,000 to build. These are clearly very specialised pieces of equipment, but do give an interesting glimpse and what will be available to the mainstream in the future.

360 video is now available through a variety of web and app platforms and there are a growing amount of ways to watch it. You can watch it the traditional way through a desktop computer and you will be able to drag around the scene during playback. If you watch it on a smartphone or tablet you can look around the video by rotating the phone, but this can be awkward to do. The best way to view it is through a VR headset like the Samsung Gear VR Headset  or Google Cardboard. You can buy a Google Cardboard for a few pounds or dollars and it really does enhance the immersion of a 360 video.

The next step up from these are a fully featured VR headset like the Oculus Rift or the HTC Vive. These headsets are really for full on virtual reality experiences, but the addition of the headphones and quality of the display make it a truly immersive and enjoyable experience.

360 video is a fast growing technology and is accessible for as little as $/£99, making it available to the mainstream market. There are only really a handful of cameras suitable to use on drones, but more and more are being announced and released all the time, so watch this space. 360 is really well suited to aerial video and photography because of the incredible viewpoints they can reach.

Some drones are now coming to market with the unique selling point that it has a 360 camera attached. That is a lot to buy into when there are other more customisable options on the market. Whatever you do decide to buy, be sure to do your research on the compatibility of the camera and the quality of the app you will be using to control it. You can do this by going on the Android Play Store or IOS App store to see the user reviews for the latest version.

When we get to the stage that we can receive real time 360 video, it will be an absolute game changer for FPV (First Person View) and drone racing. Live video is becoming the next social media trend and 360 video is there at the forefront. Facebook and Youtube are just starting to introduce live 360 streaming features. The adoption of this technology from big names will make it last a little longer that the fad some anticipated.

If you have any questions or feel we have left out any 360 cameras that you feel are noteworthy then please let us know in the comments.