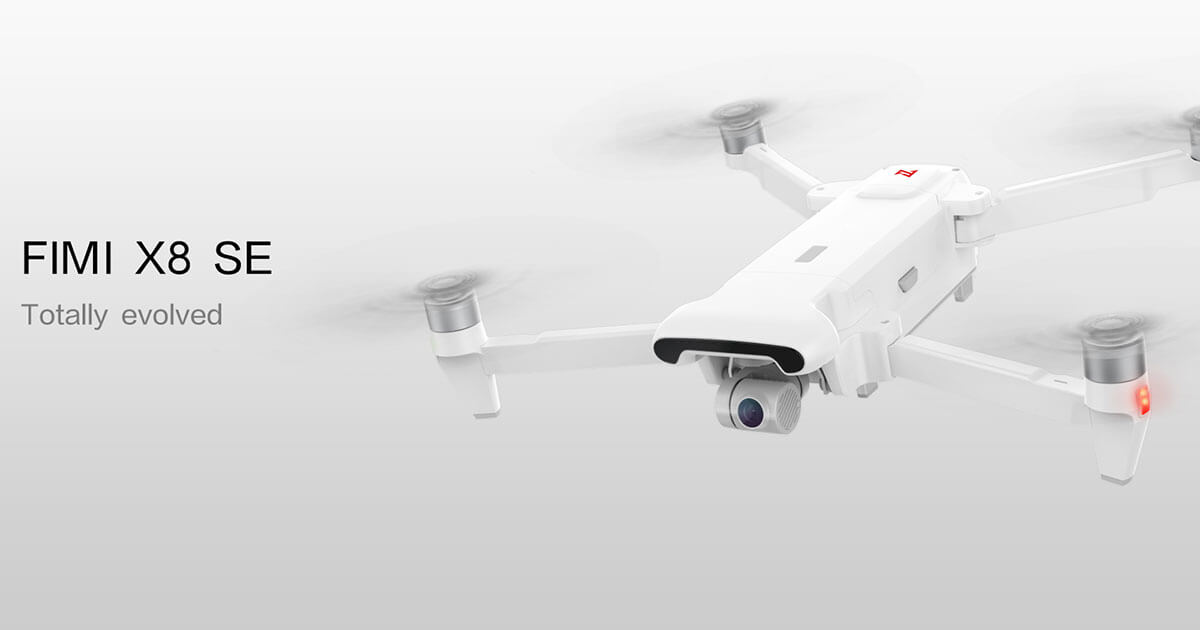 Its been nothing but tumbleweeds in drone news recently, with the only news about drones being bad news. Then out of nowhere comes something interesting, the Fimi X8 SE drone.

The Fimi X8 SE is a new drone from Xiaomi and the thing that makes this exciting is that Xiaomi has made some decent budget drones in the past. These include the Mi Mini and Mi drone, as well as the little brother to this drone, the hugely popular Fimi A3. Comparative to the DJI product line, the A3 would be the Spark and the Xiaomi Fimi X8 SE would be the Mavic Air.

The Fimi X8 SE boasts some very respectable specs including a 26mm f2.2 camera with a 1/2.3” Sony CMOS sensor. For video, it will capture 3-axis stabilised 4k at 30 frames per second at 100mbps. It can shoot 12 megapixel still images in JPG or Raw DNG format. The camera has a 3x digital zoom. It also boasts a 33 minute flight time, a 5km flight range and tops out at just over 40mph (64kph). Although this is a nice compact folding drone, it is quite heavy. It’s slightly heavier than the Mavic Pro and nearly twice as heavy as the Mavic Air.

In terms of shooting modes, it has options for Motion-lapse, Panoramas and can perform flight patterns plotted into its waypoints system. It is also capable of smart tracking, so you can get some really cinematic shots on the move. Its pre-programmed ‘Cine’ shots are right out the DJI book with Rocket, Dronie, Spiral and Circle.

Its controller is set up to fit a smartphone (Android or iOS) or even a small tablet. The app supports live view up to 5km away from the drone in flight. It has detachable thumbsticks and a nice intuitive button layout.

The X8 is going to be powered by an all-new app, so expect a lot of updates and patches if you are an early adopter of this drone. It has been adapted from another app and not been built entirely from scratch, but a few niggles and bugs are always expected.

The safety features for the Fimi X8 SE are plentiful, featuring the usual return-to-home, battery warnings and real-time GPS. It also has wind and excess power warnings and no-fly zones built-in to the flight app.

The only downside for us is the lack of obstacle avoidance sensors on the drone. But in reality that omission in the hardware is where a lot of the savings are made in producing the drone.

The Fimi drones are very popular with huge demand worldwide and the wait times on delivery can be quite long. Most mainstream shopping outlets don’t stock them either, so you will need to look a little further afield to buy one. If you want to get your hands on one of these for the summer then we would highly recommend ordering one through Banggood as soon as possible.

Is this the Mavic Air killer?

Of course not, the Mavic Air drone has been around since January 2018 and is still an excellent buy! The Fimi X8 SE isn’t really bringing anything particularly new to the table. But it is taking tech specs that are quite unobtainable for the mass market and making them more affordable and accessible. Hopefully, it will drive down the price of the Mavic Air as a result, its a win-win situation for everybody.